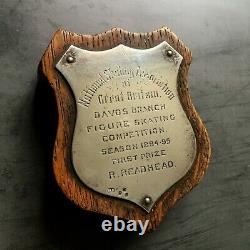 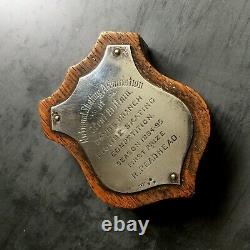 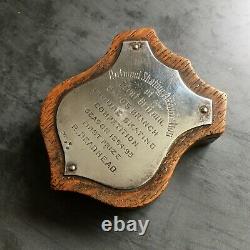 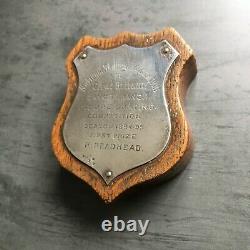 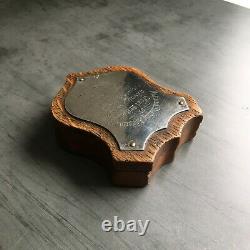 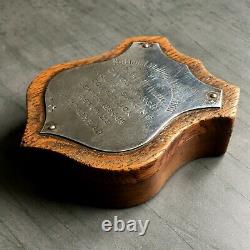 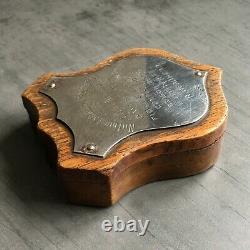 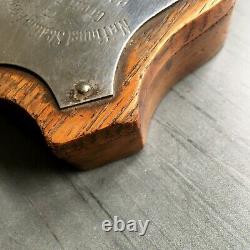 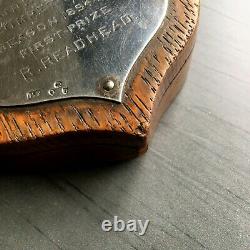 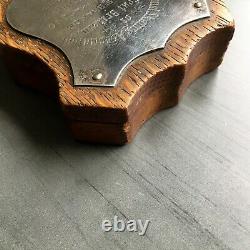 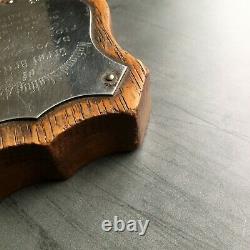 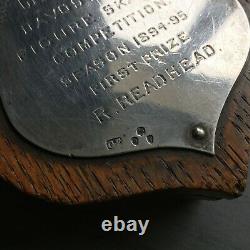 This is one of our favorite recent acquisitions. This is THE perfect antique item, perfectly functional with a fascinating back story to tell. This rare sporting trophy has unique associations to the early history of Figure Skating and the birth of Ice Figure Skating as we know it today. This small but sturdy walnut, oak and sterling silver desk weight is carved in the shape of a shield. To the top is the hallmarked sterling silver engraved plaque.

Hallmarked for London (Leopards head), year 1894 (date letter T), maker GE or possibly GF as a little rubbed. The plaque reads - National Skating Association of Great Britain. Davos Branch Figure Skating Competition Season 1894-95 First prize R Readhead. Size: 4 1/2 inch (11.5 cm) length by 3 1/2 inch (9cm) wide by 1 inch (2.5 cm) deep. A fine patina, a couple of small historic bumps to the shield edge tips. BACKGROUND - People had been skating on ice since at least the medieval times - see the famous painting of the River Thames, London frozen over in 1683. However in many countries skating could only happen during the winter months when there were extreme cold temperatures. During the last quarter of the 19th century, figure skating was extremely popular as indoor rinks were developed. Here ice could be guaranteed, and more importantly skaters could safely skate without the risk of thaw and drowning.

Idyllic Alpine and mountainous Switzerland in particular became the mecca for figure skating during this time. Competition Figure skating at this early period was very much a sport for the upper middle classes. Many British and international skaters travelled to Davos in Switzerland to skate and compete. It was the Hotel Belvedere in Davos that really pioneered what became the most successful of Switzerland's skating clubs.

THE RECIPIENT - Robert Readhead, Jnr (b 1872 d 1964) of South Shields was a successful English figure skater during his youth who competed at an international level during the late 19th century. Like most athletes who competed at an international level in figure skating he was a multi discipline athlete. He was a passionate golfer and skier. He did all of this despite suffering from ill health from an early age. Robert Readhead, Jnrs (b 1872 d 1964) son, Robert Barnabus Readhead (b 1916 d 1995), managed/judged the GB Olympics team from the late 1940s early 1970s.

Robert Barnabus Readhead's DSO (b 1916 d 1995) son, Lieutenant-Colonel Robert M. Readhead (b 1844) was also a professional skier. During the 1890s Robert Readhead, Jnr (b 1872 d 1964) won the Davos Skating Challenge Bowl several years in succession. This was an'English style' figure skating competition held in Davos, Switzerland. During the late 1890s he competed in figure skating with Lottie Dod who was named by the Guinness Book of World Records as the most versatile female athlete of all time. In 1896 the worlds first World Championship was held at St. The winning team included Robert Readhead jnr , Alfred Ernest Crawley and John Le Fleming. Robert Readhead, Jr was still competing in figure skating as late as 1909. Reference: Little Wonder: The Extraordinary Story of Lottie Dod, the World's First Female Sports Superstar by Sasha Abramsky. Historical Dictionary of Figure Skating by James R.

The diary of Robert Readhead Jnr is available in part online. The item "Trophy Victorian Sterling Silver Oak Desk Weight Early Ice Figure Skating Award" is in sale since Tuesday, September 21, 2021. This item is in the category "Antiques\Silver\Solid Silver\Statues". The seller is "thechapterhouse" and is located in Gloucestershire.

This item can be shipped worldwide.