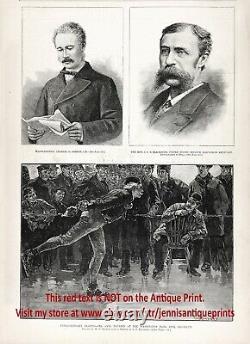 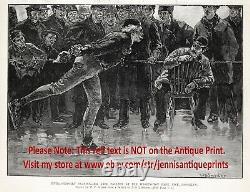 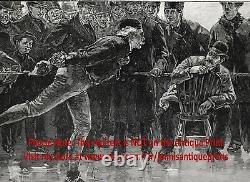 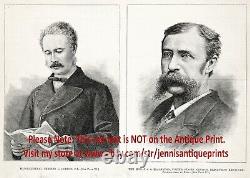 Huge original antique print from an 1880s illustrated journal. It depicts World Champion skater Axel Paulsen setting records in a race at the Washington Park Rink in Brooklyn New York. The picture fills half the page, with unrelated pictures above it. On the back of the print is an 8-inch article on Paulsen. Axel Paulsen (1855 - 1938) was a Norwegian figure skater and speed skater.

He invented the figure skating Axel jump and held the world title in speed skating from 1882 to 1890. In the winter of 1883 Paulsen went to North America to participate in a series of skating events. On 8 February 1883 a race was held at the open air rink in Washington Park, Brooklyn, New York. Paulsen defeated 17 picked skaters, the fastest from Norway, Canada, England and the United States, and several records at the race. The first Washington Park was bounded by Third and Fifth Streets, and Fourth and Fifth Avenues in Park Slope Brookyn.

The property contained an old building then called the Gowanus House, which stands today, albeit largely reconstructed. Known today as the Old Stone House, it was used as an impromptu headquarters by General George Washington during the Battle of Long Island, during a delaying action by 400 Maryland troops against approximately 2000 British and Hessian troops that allowed a good portion of the Continental Army to retreat to fortified positions on Brooklyn Heights. The print is very large (folio size), measuring approximately 11 x 16 inches (28 x 40.5 cm). The picture fills half of the page, with a caption below.

The page is in excellent condition for its age. There is unrelated text/photos on the back of the print. See scan for an accurate view of the condition.

This is GENUINE antique/vintage item. It is not a modern reproduction. This print will come with a Certificate of Authenticity. Powered by SixBit's eCommerce Solution.

This item is in the category "Art\Art Prints". The seller is "xajagirl" and is located in this country: US. This item can be shipped worldwide.